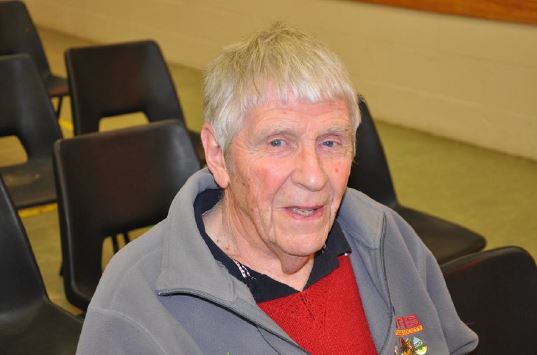 On Saturday and Sunday 13-14th April, GB4DFI was on the air from the Cray Valley RS shack to commemorate Owen's life and his strong connection to the Club. Owen kindly donated all his gear including two transceivers to Cray Valley RS, and they were used throughout the weekend. The FT1000MP Mark V was almost exclusively on 40m, and the IC7400 was mainly on 20m. Conditions were very poor and no QSOs were made above 18MHz, however in 22 hours' operation a total of 824 QSOs were logged. As is appropriate, QSL cards are available for this operation but please see the qrz.com entry for full details of the new QSL policy.

As well as two HF stations there was a display of Owen's life and times in Cray Valley RS, including a montage of the many callsigns for which he handled the QSL duties. His family visited on Saturday and both of Owen's sons-in-law took the microphone and passed greetings messages.

I was shocked when I heard Owen had passed away from a heart attack during the early hours of 29 November. He had been suffering from breathing problems for a while, and had been admitted to hospital a few days earlier. He rang me from his hospital bed. As he had missed a couple of meetings, he asked for an update on the meetings and the training course. He was due to have more tests and chest x-rays the next day. I never heard from him again.

I had known Owen since our SWL days in the 1970’s. He was a very good SWL (BRS33364) and used to contribute to my ‘SWL News’ column in Radcom. He joined the Society in 1971 and was elected to the committee in 1973/74. In 1974 he passed the RAE and was licensed as G8HYH. Soon after, he passed his Morse test and became G4DFI. Owen took on the Treasurer’s role in 1974/75, and in 1976 became Membership Secretary due to membership numbers approaching the 140 mark. Owen made it his job to welcome new members to the Society, something he was still doing 40 years later.
Owen was Chairman in 1981/82 and for a short time in 1986 when pressure of work and domestic reasons led to the Chairman at the time standing down, before being elected as Vice Chairman for 1986/87. During the early years of his membership he was an ever-present at the special event stations organised at the Danson Show, the Bexley Show and the Plumstead Make Merry in the 80’s. He had also operated at most of the special event stations organised by the Society over many years. He was ‘the fox’ at several DF Hunts in the ‘90s and ’00s. In 1995, when the Society was going through a rocky patch, he joined a sub-committee to look in depth at the status and future of the Society. Owen’s enduring work on behalf of the Society was recognised in 1988 when he was elected as a Vice-President and in 1990 when he received ‘The Founder’s Cup’. Even in recent years when his health was deteriorating, he was an ever present at meetings and fully supportive of the Society and its activities.
Owen also enjoyed contesting, taking part in the major HF SSB contests (CQWW, CQWPX, ARRL DX) and some of the smaller ones (Helvetia, UBA, PACC, etc). He was proud to have received many first place certificates. He also supported Society contest activities, submitting logs for the 2m UKACs, 2m AFS, 80m AFS, etc. He worked 225 DXCC entities but never applied for DXCC. However, Owen was seriously into VHF DXing in the 70s and ‘80s and often reminded me of the DX he had worked in 2m tropo and Sporadic-E openings. Owen was one of only a handful of members who qualified for the Gold Award for working 100 Cray Valley RS members.
But perhaps Owen’s main claim to fame was as our QSL Manager. I’m not sure how long he had done the job. Records show he was QSL Manager for M2000A in 2000, but he had acted as QSL Manager for our special event stations well before then. He responded to thousands of QSL requests; the boxes of QSL cards in his garage are proof of his dedication to grow the name of Cray Valley RS around the world. As a result his callsign is synonymous with the great QSL Managers around the world. Since 2000, Owen had acted as QSL Manager for 29 special event stations organised by the Society, as well as a number of Nobby G0VJG’s DXpeditions.
Owen was truly a stalwart of Society activities from the day he joined right up to his untimely passing. On behalf of the Society, thank you for everything you did for us. You will be sorely missed.
Rest in Peace, dear friend.