The Special Event Callsign GB75CV was issued by Ofcom, to follow on from GB60CV and GB70CV. Operation of GB75CV took place from the club's well-equipped shack in Eltham.

A social event for CVRS members and their partners took place on Thursday 21 October, with approximately 35 members in attendance, and another ten connecting online via Zoom. After speeches by the President, Bob Treacher M0MCV and the Chairman, Dave Lawley G4BUO, there were light refreshments and then at 8.30pm the anniversary cake was cut by Chris Whitmarsh, G0FDZ.

In the lead-up to the 70th Anniversary Chris, G0FDZ put in a huge amount of work to collect an archive of club activity going right back to the 1940s. The collection is mainly photographs, but also has videos, magazine excerpts, articles, and members' QSL cards. For the 75th anniversary Chris has updated the collection and added material from 2016 onwards. The collection will be made available for sale on a 256Gb memory stick in December 2021. Commemorative polo shirts, caps, callsign plaque, engraved glassware and coffee mugs with the CVRS75 logo are available now. 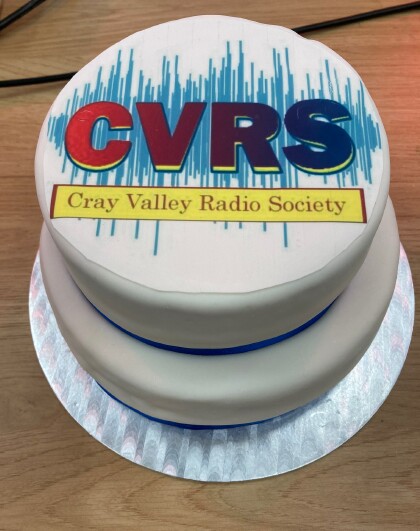