Following the successful large-scale special event stations M2000A and GB50, the Cray Valley RS team ran a third large event from 17 to 24 October 2005 to mark the bicentenary of the Battle of Trafalgar.

A single antenna mast was placed on the front lawn of the National Maritime Museum in Greenwich, and supported antennas for 80m through to 70cm. It was 'dressed overall' with signal flags in the pattern that would be used by a Navy ship in harbour on a special occasion. 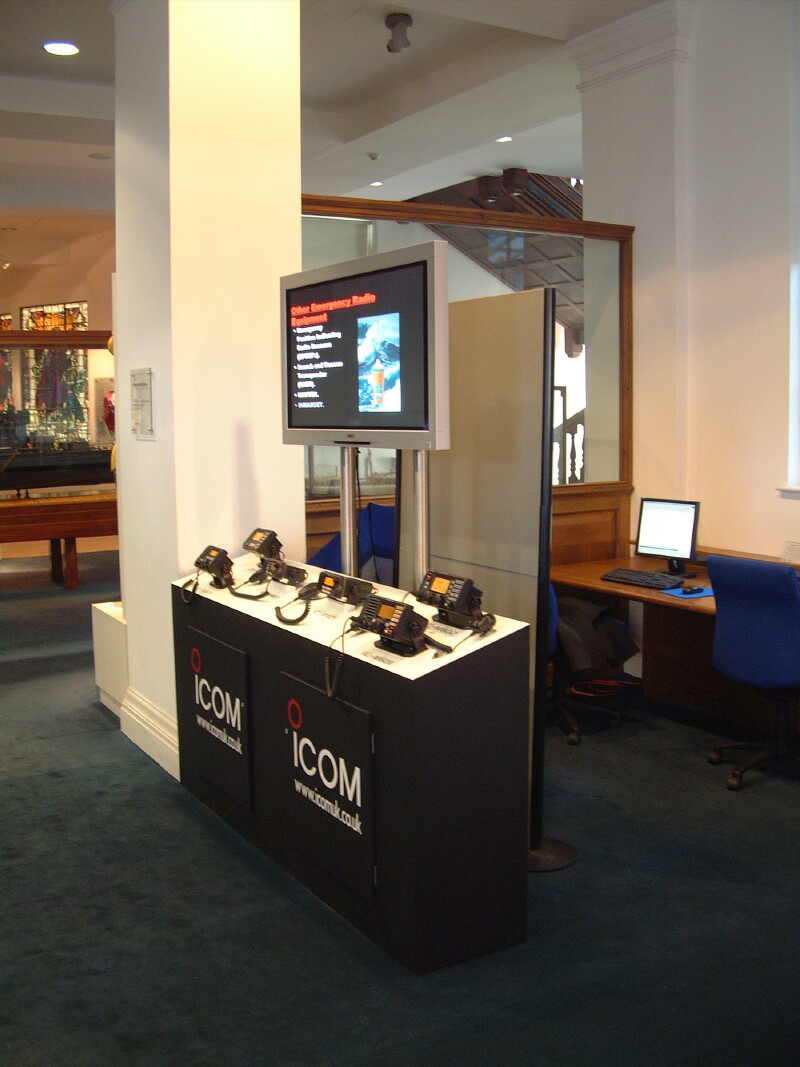 Meticulous planning with the Museum authorities was necessary in order to get the station set up outside of museum hours: the tower was brought on-site on Sunday evening, then the team had just three hours 7am-10am Monday 17th to get everything set up and ready for operation to commence. Dave G4BUO and Chris G0FDZ led the outside team installing the antennas, and the hero was Ralph M0MYC who climbed a perilous ladder to install the bundle of coax cables leading from the tower to the operating position. Inside, Bob M0MCV led the team that set up the station, radios and display material. Boxes and support materials were cleared away in the few minutes before 10am and all was ready for GB200T to get on the air.

Installation of a couple of wire antennas had to be left until the Monday evening, so it was a surprise on the first morning to hear Simon 2E0CVN running a fierce pileup on 10MHz CW - the dipole hadn't been installed yet! It turned out that he was using the 6m crossed dipoles, mounted high up on the tower.

Icom UK again sponsored the station, supplying an extensive range of operating equipment – an IC-7800 and IC-756PROIII for HF and an IC-7400 and IC-910H for VHF. An Acom 1010 amplifier was used with the IC756PROIII. Despite applying for grants, none were forthcoming as they had been for the M2000A and GB50 special event stations. Funding for the event therefore came largely from team members. 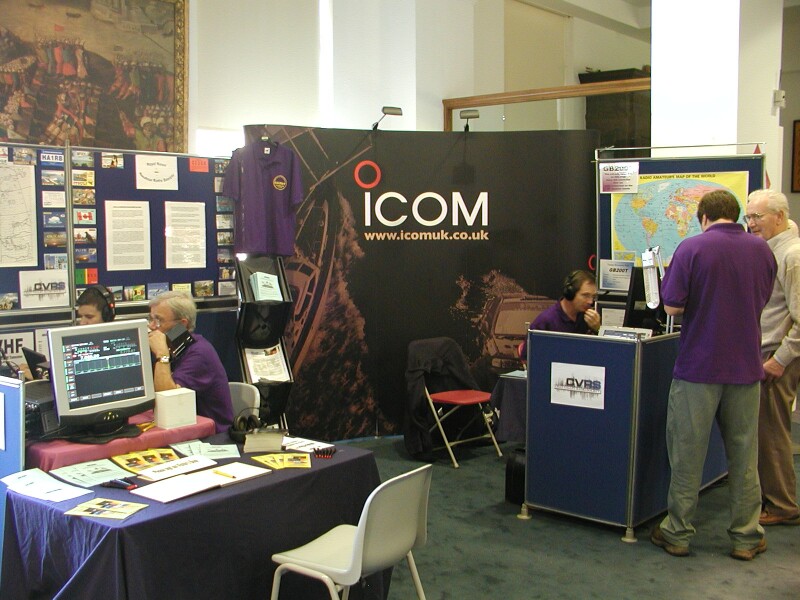 The station was set up in a 14’ by 10’ area inside the E-Library of the Museum. All Cray Valley RS’s special event stations have been built to enable visitors see the operators face-on when they approach the station – there are so many examples of special event stations where the public’s first uninspiring impression is just the back of the operator’s head hunched over a radio! All three GB200T stations were fitted with an audio amplifier and loudspeaker independent of the headset audio so visitors could hear what was going on.

With the very limited room available, three operating positions were set up: HF1 (10 – 20m); HF2/VHF1 (WARC bands and 6m/2m/70cm); and HF3 (40/80m). Due to space limitations, HF and VHF could not be used simultaneously. Dunestar and ICE bandpass filters were used on all the transceivers to minimise inter-station interference. Icom UK also provided a flat screen LCD monitor which was ‘slaved’ from the display at the centre of the IC7800 front panel. This was used to display S-meter and band scope of both receivers, and was positioned so it was in full view of the public. 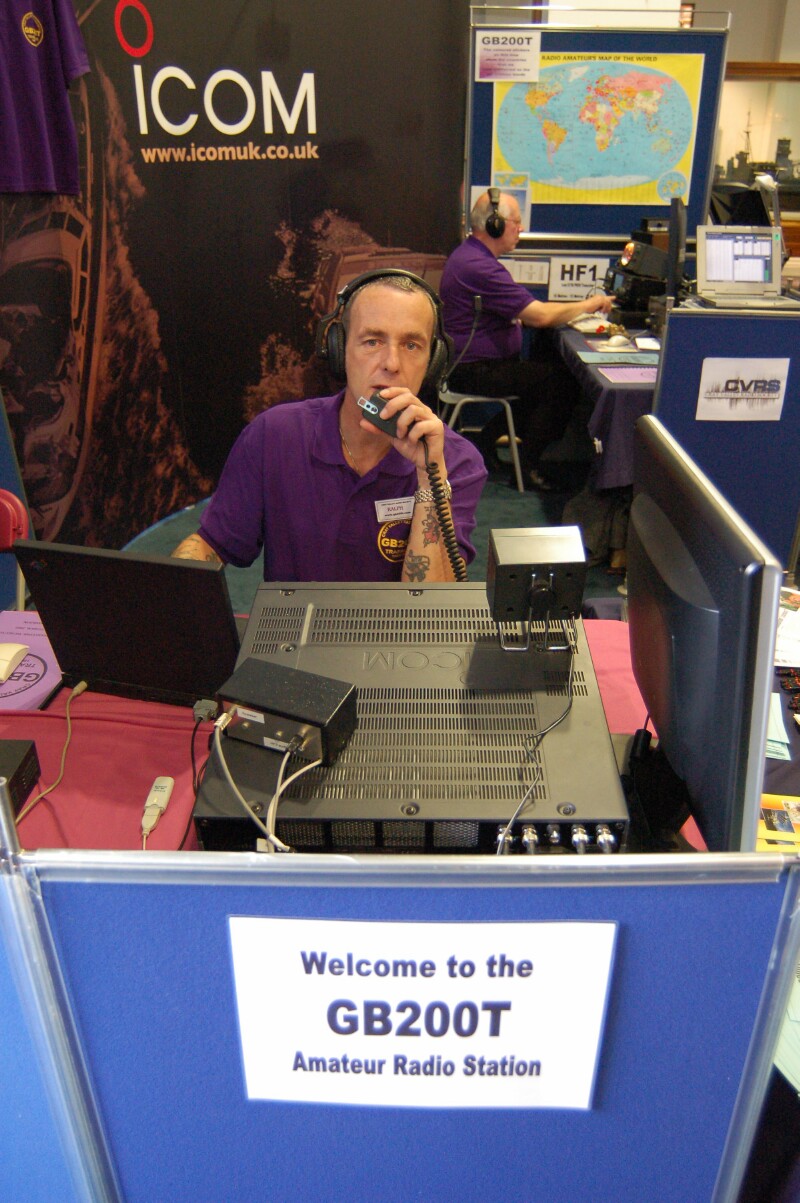 GB200T used ‘Starlog’ logging software. This product had been successfully used by the Five Star DX Association on the earlier D68C (Comoros) and 9M0C (Spratly Is) DXpeditions. All the contacts at GB200T were fed to a central server, from which daily extracts were e-mailed to the station’s webmaster, so radio amateurs around the world could check if they had made it into the log. Society members loaned laptop computers for logging at each station. These were connected on a wireless network. ‘Starlog’ also enabled the operators to check instantly when someone called to see if they needed a contact on another band or mode. This facility encouraged callers to QSY for a contact on a different band or mode, and also led to an increased number of award claims received by Clare RS102891, who was once again awards manager for the event. The software also had ‘talk’ facilities so the operators could exchange messages with other operating positions.

All team members wore special purple polo shirts, so that they were easily identifiable to visitors. The station made contact with 13,701 stations during the eight day operation. Apart from many British, European, American and Japanese stations, GB200T also contacted many more exotic locations, including: Alaska, Hawaii, Swaziland, Singapore, Mongolia, Papua New Guinea, Brunei, Hong Kong, Iraq and New Caledonia. A number of special contacts with other ‘Trafalgar’ stations were arranged for Trafalgar Day on 21 October 2005, including ZL6QH in New Zealand, GB200RN at HM Dockyard, Portsmouth, GB200HNT at HMS Cambria, GB4BOT at Pendeen, Cornwall, and ZB2TRA in Gibraltar. As usual, QSL Manager duties were handled by Owen, G4DFI 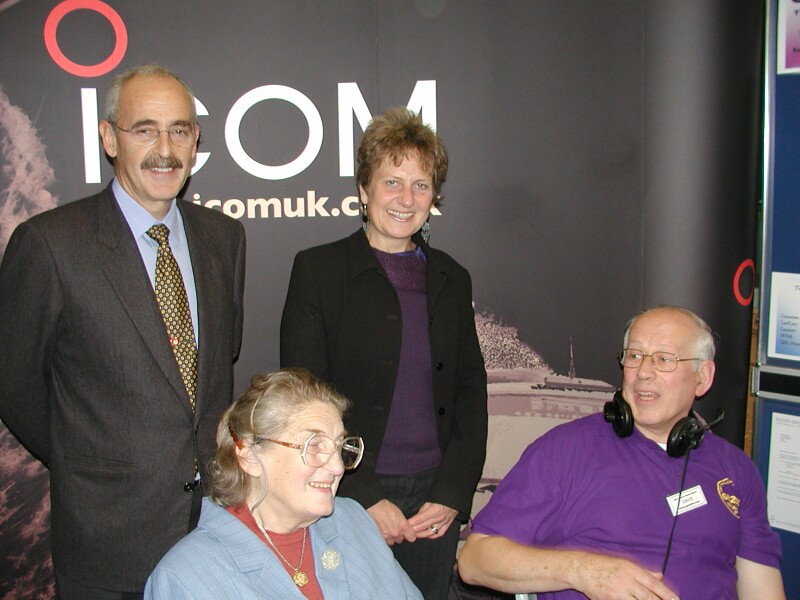 2,500 people visited GB200T, including those with a family connection to the Battle of Trafalgar. Among them were Anna Tribe and Mary Horatio Arthur, both direct descendants of Lord Nelson, and Santiago Churraca, a direct descendant of Cosme Damian de Churraca y Elorza, commander of one of the Spanish vessels in the battle. Other visitors included Colin White, Chair of the official Nelson Commemoration Committee, Roy Clare, Director of the National Maritime Museum, and Clive Efford, MP for Eltham. 200 younger visitors passed ‘Trafalgar 200 greetings messages’.

Public enthusiasm for the event was tremendous, the organisation superb and the pile-ups massive, but the lasting memory of the third high profile station organised by the Society was that, once again, amateur radio in the UK had successfully been put firmly in the spotlight by Cray Valley RS. It also provided a unique opportunity for radio amateurs around the world to share in the Trafalgar bi-centenary celebrations. Following the third major special event station by Cray Valley RS, the core organising team M0MCV, G4BUO and G0FDZ decided that three was enough and they would retire from organising this scale of special event station. 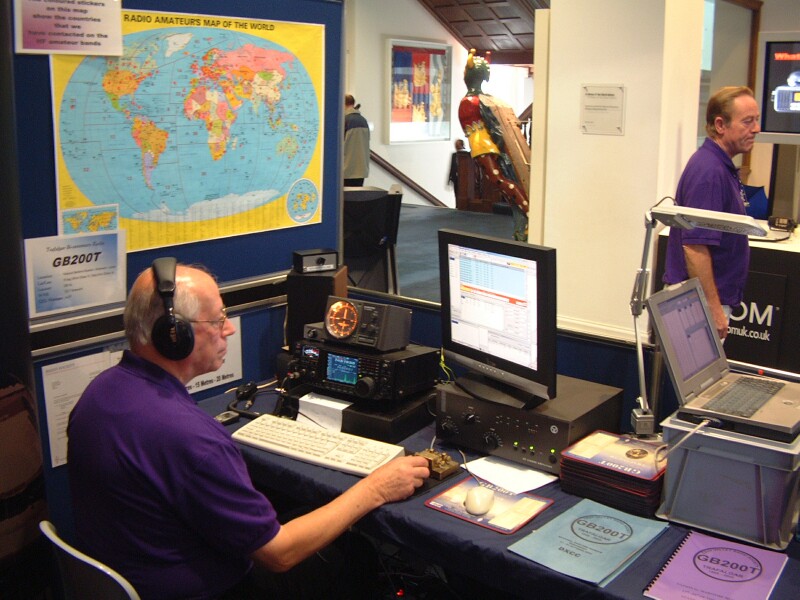 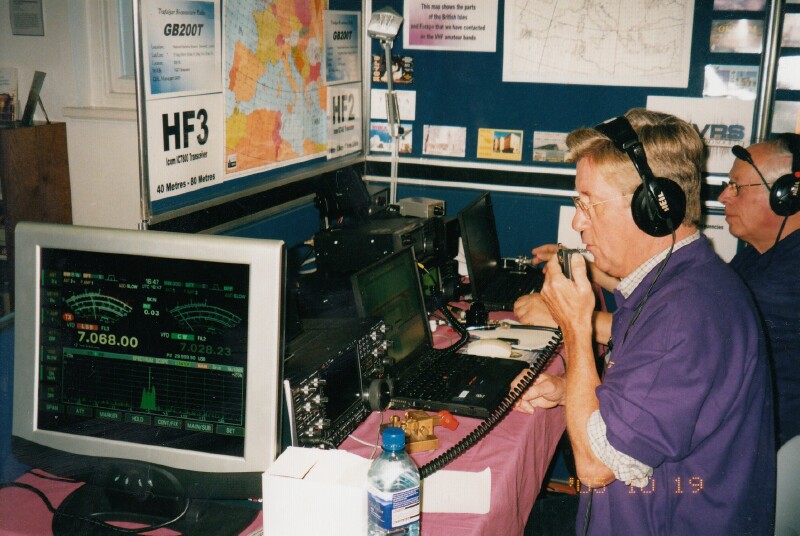 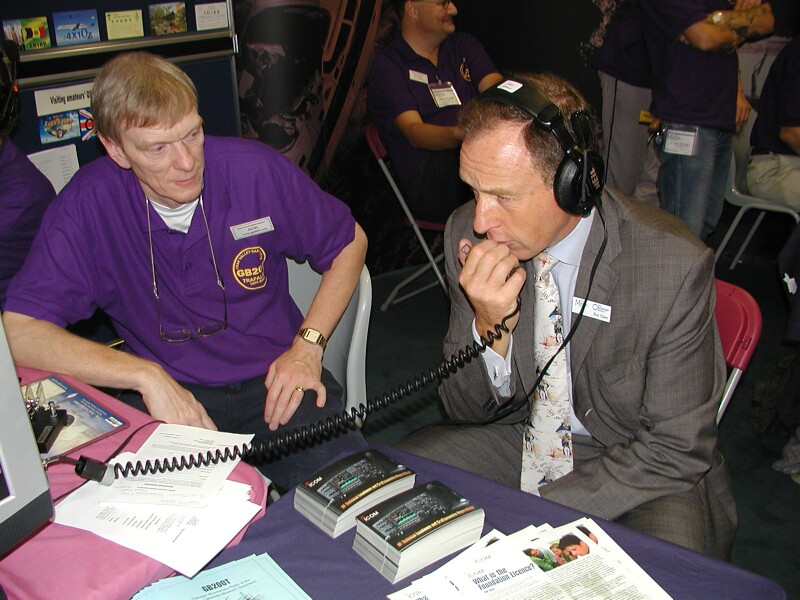 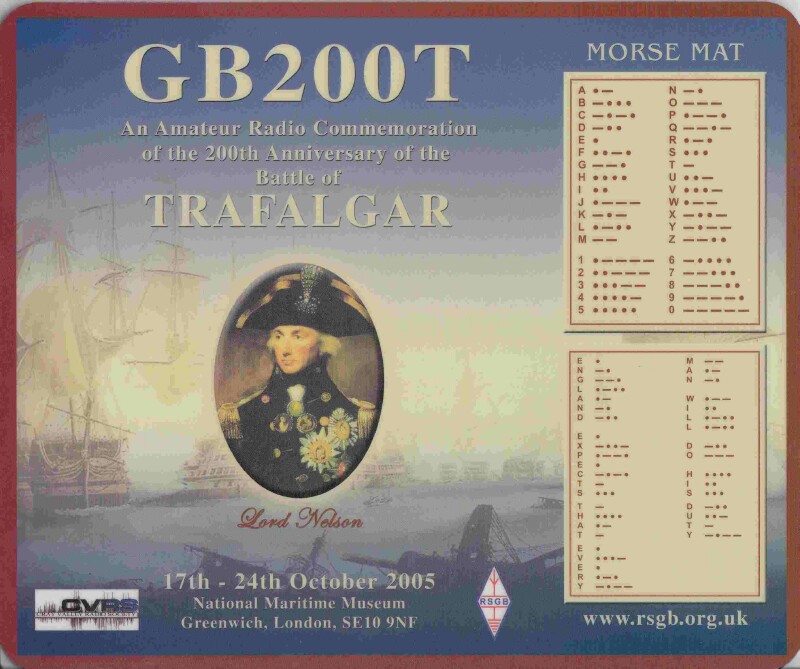 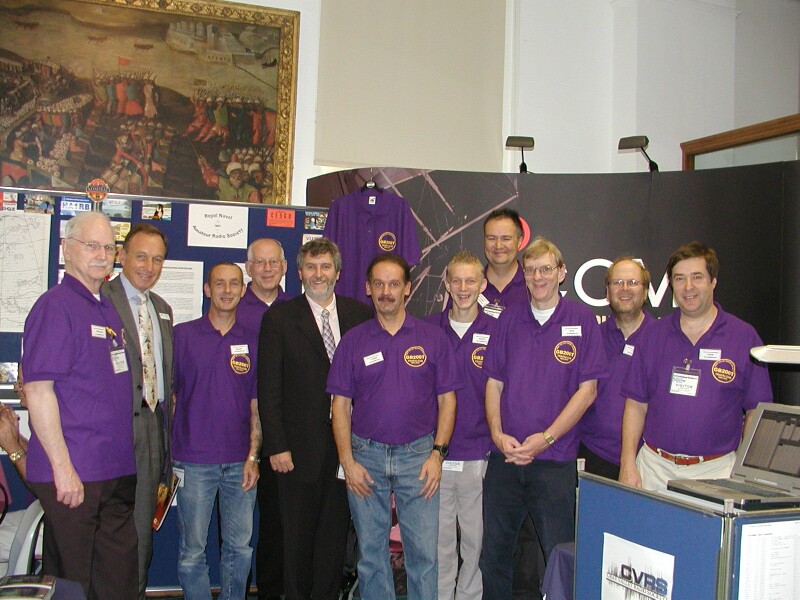 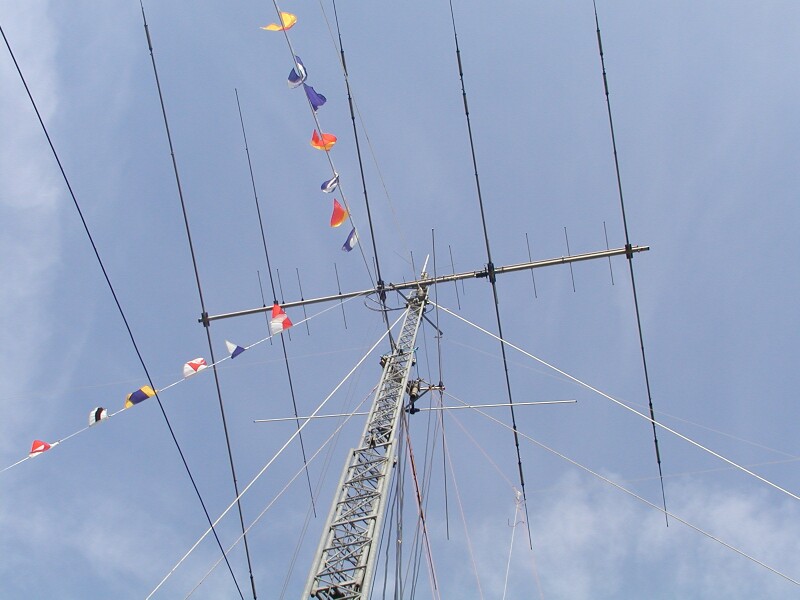